Buba. And Nothing Else Matters... 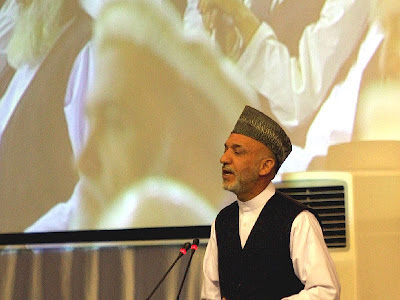 In a recent profile of Mahmoud Karzai, "The New York Times" described the 54-year-old brother of Kabul's preeminent politician as "one of Afghanistan's most prosperous businessmen." But Karzai sees himself a bit differently, as a hardworking and law-abiding businessmen who is investing in his country's future and wouldn't even count himself among the top 1,000 wealthiest Afghans.

Uncovering anyone's assets in a country whose business and ownership structures are as murky as Afghanistan's is difficult. But the nature of the allegations, particularly against the backdrop of President Hamid Karzai's bid for reelection later this year, appear to have struck a nerve with Mahmoud Karzai, who concedes it's "very difficult to legally make a profit in Afghanistan" but attributes them to political sniping.

Many of his critics say that Mahmoud Karzai -- who in addition to a car dealership and coal mining is involved in numerous real-estate deals and has interests in the country's only cement factory -- got where he is through his ties to his brother.
"The only millionaires here are those who abuse their connections with the government, who steal and engage in corruption," Mahmoud Karzai tells RFE/RL. "If my brother was not the president, my business interests in Afghanistan would still have moved forward. But I am very careful, because I don't want my brother to suffer politically because of my activities, and all these attacks and allegations are of a political nature."

Mahmoud Karzai, who holds a U.S. passport, owns four restaurants, a house, car lots, and other commercial and residential properties in California and Maryland -- all purchased before he returned to Afghanistan following the U.S.-led ouster of the Taliban in 2001. He says his U.S. holdings have not changed since that time, and that any money he is making is being reinvested in long-term development projects to help rebuild his ancestral homeland.

Karzai says the scope of his business dealings and his personal fortune was greatly exaggerated in "The New York Times" report. He offers as an example his interests in Afghanistan's only cement factory, where he says he does not even draw a salary. "The New York Times" listed among his assets "major interests in the country's only cement factory," and added that "[Karzai] and other investors assumed control...when they were the only bidders to show up with $25 million in cash."

"About the cement factory, I must tell you that I gave [the 'New York Times' correspondent] the list of all shareholders, which detailed how many shares were there and who owned them," Karzai says. "There are 4,500 shares in the cement factory and I only own 300, but he presents it as if I own the cement company, which is very wrong."
Posted by Oana Dobre-Dimofte at 02:26 5 comments: